We saw in my earlier blog ‘Pigments from the Middle Ages to the Renaissance’ ( Nov 9 2018) just how conservative artists were in their use of materials. Having spent many years acquiring the knowledge and skills of their craft and conscious of the many hours of skilful labour on each work, they were not prepared to risk their time or reputations on experiments with new materials.

The Renaissance brought change in how artists handled the new material of oil paint; they used the same pigments that had been available since antiquity but in a new paint medium – oil.

From the 17th century onwards another period of expansion and development, the majority of post renaissance pigments were the result of the emergence of modern synthetic chemistry.

Artists’ represent a tiny proportion of the market for pigments, pigments were made principally for other industries.  Then as now artists adopted pigments developed for industrial use, for example dyes* for the textile industry. There has always been an interval of some years after the introduction of a new artists pigment before it has been widely adopted by artists.

Many of the new inorganic pigments resulted from the isolation of newly discovered metallic elements and experimentation with their salts; zinc, cobalt, chromium and platinum in the 18th century; cadmium (light yellow to deepest shades of red through to bron) and strontium (lemon yellow) in the 19th century; manganese (black & browns), titanium (white) and molybdenum (blue) in the 20th century. All these metallic salts produce ranges of bright, stable (though not always non toxic) pigments. Other useful pigments were discovered during this period too in experiments with more familiar materials; Prussian blue (Fe) 1704, French Ultramarine (NaSi) 1828;  patent yellow (Pb) 1770’s, Scheele’s green (Cu As) 1778 .

Early artists’ palette did not have the bright, opaque yellows and greens so essential in landscape painting. The 18th & 19th century colours – Prussian, cobalt and chromium greens along with Emerald and Brunswick green – were welcome additions which together with patent, chrome, platina, lemon and cadmium yellows could provide a riot of greens beyond the wildest dreams of a 17th century painter. Due to toxicity many of these greens were short lived on the artists palette but we do see them in paintings and marvel at the intensity of colour e.g emerald green, a copper arsenic green; brunswick green (1764), a copper chloride green.

The traditional dependence of artists’ colour-makers (once the apothecary) on the new dyeing trade continued, resulting in a wealth of bright new organic pigments mainly of the lake** type, some of which were less fugitive than the traditional crude plant and animal dyestuffs that they replaced. Among these alizarin (madder) , quercitron (transparent yellow lake) and the early aniline*** hues were less dependable than the Hansa yellows and phthalocyanine blues, which appeared in the later 19th & 20th century.

It is a measure of artists’ conservatism that medieval pigments still figure large in the modern Colourmens’ lists. However it is also an indication of the improvements in pigment manufacture that many of these are not the original materials but near perfect imitations of their hues concocted to avoid the defects of the old colours. Thus we may now buy non-toxic and non-reacting Naples yellow (Pb) and orpiment (As) or carmine and sepia that are almost light fast.

* dyes – soluble in water. Pigments are not water soluble; to make a pigment from a dye a complex chemical process known as Lake making is undertaken – see below.

*lake pigments – a dye struck onto a metal substrate, usually aluminium hydrate. The resulting material is an insoluble pigment.

***aniline hues – this group of synthetic pigments were originally called coal tar colours as they were derived from chemicals from the distillation of coal tar – the result of the gas industry. Made from 5 basic raw materials – benzene, toluene, naphthalene and anthracene. The first pigment of this group is Mauve discovered in the UK by Sir William Perkins in 1856 (making him a millionaire). 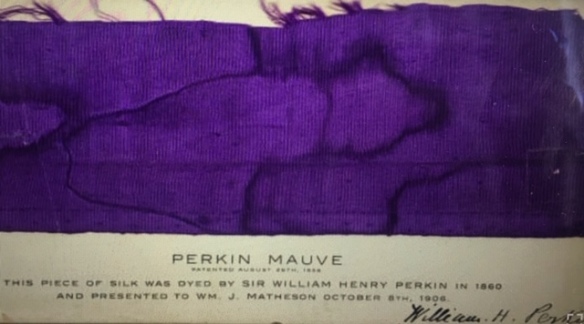