‘The Repair Shop‘ is probably the first programme on TV to reveal some of the ins and outs of the Conservation of Paintings. In the Christmas Special you’ll see me working on a particular type of  painting – a European-style picture from the colonial era of South America. It’s a well known and relevant Christmas subject ‘Virgin and Child’  painted ‘Statue‘ style, imitating statues commonly seen on the Church altar – it is not a realistic figure.

This particular painting is remarkable not only because it is in the statue style and tells much ‘news’ from the old world, but in the face of the Madonna we see the face of an indigenous Quechua woman.

The designs in the fabric of the Virgin’s mantle are tulips, the mania of which stormed mid 17th century Europe. This religious painting, set in contemporary style, brings news not only of the birth of Christianity but the latest fashion edit from the old world.

Another notable feature of the painting is the artists attempt at creating movement in the image. The caucasian looking angels hold candles whose flames gutter in a breeze (whoosh?) created by a hovering Virgin moving forward towards us, the viewer. If you can imagine looking at the image in a darkened room, lit only by candle, the vision before you takes on a mystical intensity.

There’s more to paintings than meets the eye and these blogs aim to provide incites into  the creative process and the materials and techniques that get us there, as well as inside info on the wonderful world of Conservation.

The other charming event in the Christmas special episode of  ‘The Repair Shop’ was the ‘secret Santa’. We each produced a gift for our secretly selected person. It wasn’t possible in the edit to show all the hand made gifts but at the request of many as to what I made ….. here it is, recipient and all :)))) Happy Christmas everyone! 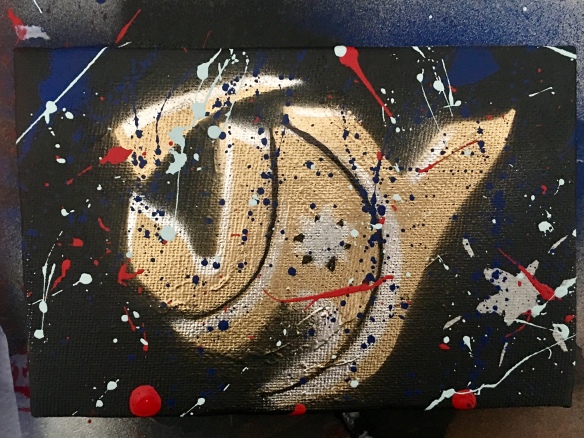